I have, quite literally, been walking my ass off the past few months.

My previous post about walking 25 miles over the course of a weekend, while I find it super impressive, is just part of what a normal week is for me. This week, for example, I’ve already exceeded 25 miles, and it’s only Thursday, and I’ll be putting on my Reeboks as soon as this post is done and logging another six or seven miles by the time I get home.

Having said that and that fact that I’ve been walking my ass off and feeling my jeans get bigger and getting back into some of the clothes that have been shoved into the bottom of a drawer or the back of my closet, the scale has just been an unbudging SOB. In fact, it even went back up five pounds, which I know is a bold-faced lie because 1) I’m wearing those clothes that finally fit again, 2) I definitely see a difference in my face and stomach and 3) I am more often than not eating less than my caloric allowance because of all that damn walking, which is obviously a key to weight loss. 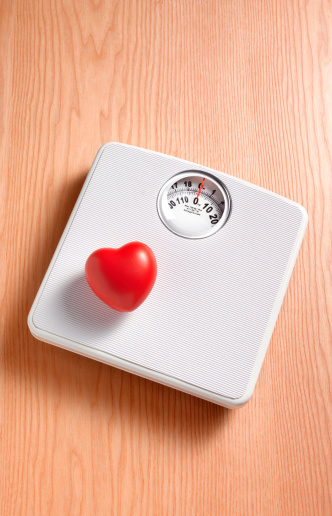 The scale has been giving me NO love lately. (Getty Images photo)

It’s been depressing me, to be honest, and the old me would’ve been derailed by my weekly (or multi-weekly, if I’m being completely honest) weigh-ins ten times over, so what the hell gives? I have never eaten so well, so clean and so good in my life — I mean, I am eating spinach and other veggies and fruits like it’s my damn job, we’ve pretty much cut out everything white and hardly eat a starch with dinner anymore. I actually crave all these good things on a daily basis, and even on the weekends, when we have our one lax day where we might, say, have an Irish breakfast for brunch or indulge in a burger or share a lemon gingerbread cookie at our favorite bakery, it’s usually after one of our mammoth walks so at the end of the day, I still have a ton of calories left over.

So yes, scale, I am having a pretty big beef with you right now. I’ve been chalking it up to the fact that it was the cheapest scale they had at the store when I bought it last year, but c’mon. It’s one of those stupid old non-digital ones, how could you not work properly? Especially after you showed me that 15-pound loss so lovingly just a few weeks back?

Last night, I finally confessed my depression about the whole thing to the fella, and he found it BS, too, saying he knows I’ve been losing because he sees it when he looks at me and knows how well I’ve been doing. He thought maybe it’s because it’s a cheapo scale and that maybe, since he was standing on one of the floorboards that creak in the house because it’s slightly raised, where I’m stepping on in the bedroom might be uneven or something.

With that in mind this morning, when I finally decided to hop back on (it’s been about a week since I last weighed myself because of this whole scale-hating episode), I moved the scale and voila, there was that lower needle that I’ve been looking for, thank the gods of weight loss!

In my years (and years) of trying to lose, I have always read in fitness magazines and on blogs that you should throw your scale out because of the very reason I’m about to mention as the reason I just can’t perform said action. Most women have been trained to think in numbers when it comes to weight, not just “going by how your clothes feel” like those blogs and magazine articles tell us to do.

It’s really hard for me to not track my progress with a scale, and I think that not having one when we first moved to New York, though it was not the sole catalyst for the weight gain I am now battling, I do regret not having one to check in on. I think seeing the number creep up might’ve helped get me in line a lot more than my tightening pants, which is stupid, I know, but I think some of you will agree with me that we sometimes come up with excuses like, “Oh, they were just washed,” and then come home with the button imprint embedded on our bellies.

So what about you? Are you a slave to a scale or a go-by-the-fit-of-my jeans kind of person? I’d love to hear your tips and suggestions!

3 thoughts on “Fighting with the scale”